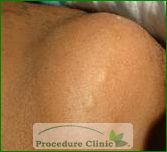 A lipoma is a slow-growing, fatty lump that’s most often situated between your skin and the underlying muscle layer. Often a lipoma is easy to identify because it moves readily with slight finger pressure. It’s doughy to touch and usually not tender. You may have more than one lipoma. Lipomas can occur at any age, but they’re most often detected during middle age.

Lipomas are the most common soft-tissue tumor. It occur in 1% of the population. Most of these are small subcutaneous tumors. Although it has been hypothesized that lipomas may rarely undergo sarcomatous change, this event has never been convincingly documented. It is more probable that lipomas are at the benign end of the spectrum of tumors, which, at the malignant end, include liposarcomas. Treatment generally is necessary if the lipoma is in a location that bothers you, is painful or is growing.

There’s a very small chance that a lump resembling a lipoma may actually be a form of cancer called liposarcoma. Liposarcomas — cancerous tumors in fatty tissues — grow rapidly, don’t move under the skin and are usually painful. A biopsy, MRI or CT scan is typically done if your doctor suspects liposarcoma.

The exact cause of lipomas is unknown. Lipomas tend to run in families, so genetic factors likely play a role in their development.

Surgical removal: Most lipomas are removed surgically by cutting them out. Recurrences after removal are uncommon.

Steroid injections: This treatment shrinks the lipoma and relieves the pain, but usually doesn’t completely eliminate the tumor.

Liposuction: This treatment uses a needle and a large syringe to remove the fatty lump. It’s difficult to remove the entire lipoma with this technique.