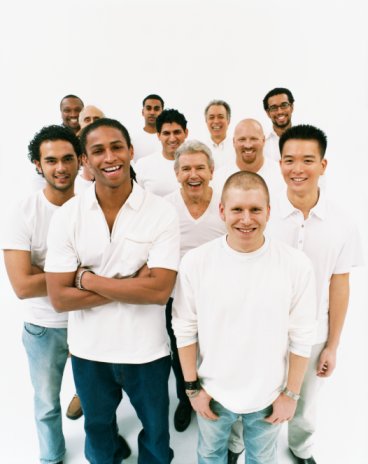 It is difficult to find another surgical procedure as simple as vasectomy that has sparked so much medical and social controversies for more than a century. The history of this procedure is a combination of finding the most ideal technique and the best results but also filled with misconceptions, false beliefs and incorrect indications. Vasectomy has a long and interesting history. The term vasectomy means an excision of the vas deferens.  In Latin, vas means vessel and deferre means to carry down.  As a medical term, vasectomy is somewhat misapplied because only part of the vas deferens is excised during the procedure. Vas deferens as an anatomic structure was not a subject of significant clinical and research interest until the nineteenth century.

Most people believe that the practice of vasectomy started in 1950 but the concept of male birth control dates as far back as the 1640’s when the first known condoms were used. The first condoms were made from fish and animal intestines. It was believed they were used to stop sexually transmitted disease.

In 1830, Sir Ashley Cooper’s “Observations on the Structure and Diseases of the Testis” was published in London. Cooper found that when the blood vessels of a dog’s testicle were tied, no issues followed coitus. This experiment on the dog, is what seeded the development of a surgical procedure for birth control in men called vasectomy. The dog, however, retained the ability to produce sperm even after 6 years of the surgery. In 1847, Gosselin found while dissecting human corpses with the vas deferens entirely blocked. He started studying the effects of removing part of the vas deferens and tying it together using dogs for his experiments.

In 1844, the first rubber condoms were being used for male birth control. Goodyear and Hancock began to mass produce condoms made out of vulcanized rubber. Vulcanization is a process which turns crude rubber into a strong elastic material. In 1861, the first advertisement for condoms was published in the New York Times. The printed ad was for Dr. Power’s French Preventatives. Unfortunately the Comstock Law, named after Anthony Comstock, was passed in 1873 making it illegal to advertise any sort of birth control. The law also allowed the postal service to confiscate condoms sold through the mail. We have come a long way since then.

In 1890 vasectomy is suggested as an alternative to castration by Ewing Mears for the treatment of severe symptoms of enlarged prostate glands. Then in 1899 Ochsner (future professor of Surgery at the University of Illinois) publishes his paper “Surgical treatment of habitual criminals”, which kick-starts the Eugenics movement. The Eugenics movement uses science to reform and control nature and human society. It stems from the idea of survival of the fittest.

In 1900, Harrison publishes a paper based on over 100 cases where Vasectomy was the primary procedure for the removal of bladder stones. Claims of rapid and substantial improvement with minimal morbidity led to the treatment being fashionable for a short time for management of enlarged prostate. Wood publishes a case study of 193 patients undergoing vasectomy as treatment for enlarged prostate. 15% had improved urination, but 67% manifested some “General improvement”.

In 1902, Bilateral Vasectomy was first established to be effective in reducing the incidence of epididymitis after prostatectomy. The medical profession had sought hard to find an alternative to the existing practice of castration for enlarged prostate, and it was established by White that vasectomy was an effective treatment. One of the reasons an alternative was sought is because of the reputed case whereby a disgruntled patient murdered a surgeon! Vasectomy remained in common use as a cure for post-prostate surgery until antibiotics were common place.

In 1907, Parlovechoi first attempted to reverse an accidental vasectomy that occurred in a hernia operation. Later authors describe the technique under the names of Vasorraphy or vasovasal anastomis.

During 1907-1910 Vasectomy is recommended to be used to sterilize “the undesirables” of the world. Belfield publishes his paper “Race suicide for social parasites”. He was one of the proponents of enforced vasectomy for criminals. This is where the Eugenics movement comes into play. In 1910 Russia sent a delegate to the United States to observe a male prisoner being sterilized. 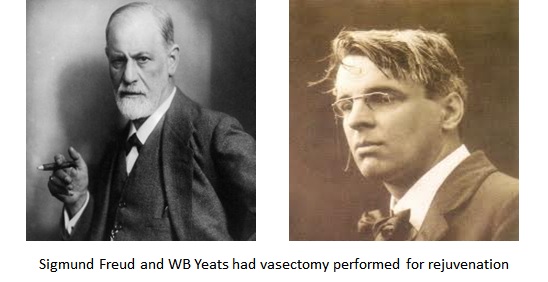 By 1948 the list of indications for vasectomy were: prevention of the insane, criminal or perverse producing offspring, the wife having precarious health and is unable or refuses to undergo tubal ligation, an agreement between the husband and wife to prevent pregnancy, to prevent epididymitis following prostrate surgery, male rejuvenation, and mass sterilization for the purpose of racial limitation/extermination.

In the 1950’s a case is reported of a vassoraphy or repair performed 10 years after the original vasectomy with complete function. The patient’s wife was able to become pregnant 6 months after the procedure. Vasectomy is becoming favorable for use for sterilization. By 1953, vasectomy procedures had been watched for a period of 30 years and were found to have no adverse side effects. Any complications were reported were a result of technical surgical errors. In 1955 Jhaver introduces the single incision, single stitch approach. The advantage being that a bilateral vasectomy was possible using one incision with less surgical trauma and post-operative care. He publishes his technique in 1958.

New techniques continue to appear for vasectomies. In 1967 a new technique is introduced in India by Kothari and Pardanani. They demonstrated that it’s possible to produce a sub fertile sperm count by using a synthetic thread to temporarily obstruct the vas deferens. Removing it would restore fertility. Based on two cases the thread was left in for 20 weeks and 6 weeks later fertility had returned to previous levels. No-scalpel vasectomy was developed in China in 1974 by Dr. Li Shungiang of Chongqing Family Planning Research Institute, Sichuan province. Tubal ligation was the most commonly used method of voluntary sterilization. Vasectomy was not popular with Chinese men. The new technique was minimally invasive with a much lower complication than the conventional method.

This is the final part of the long and interesting history of the Vasectomy. The first non-scalpel vasectomy was not performed until 1985 in the United States by Dr. Mark Goldstein at the New York Presbyterian Hospital Cornell Medical Center. He was a member of the international team, sponsored by the Association of Voluntary Surgical Contraception that went to China to learn the procedure. The procedure was then introduced to other countries by the other team members.

In 1999 the no-needle vasectomy is introduced after 6 years of preparation. A spray jet injector was used for the local anesthesia. This technique was developed by Dr. Charles L. Wilson of Seattle, WA in consultation with the late Dr. Ralph Adam who was the inventor of the MadaJet device used in this technique. The local anesthesia given with 30 gauge needle is almost painless in the good hands, mild pain while given anesthesia is actually caused by the acidic lidocaine, but the application of Madajet does reduce the anxiety in the needle phobia patients.

A Study is published in China in 2003 about the long term effects of vasectomy on benign enlargement of the prostrate. (BPH) The study concludes that vasectomy reduces the incidence rate of BPH significantly.

Robotic vasectomy reversal is first performed on rats in 2004. A study was done using a new microsurgical robot that had FDA approval in 2000. It was used to perform two types of reversal procedures on rats. The robot does not have the shaking hands that humans do. The initial results were that the robotic group had less obstruction or blockage than the group where humans performed the procedure. The incidence of granulomas was also much lower in the robotic groups.

A 2005 publication of research into the “no needle” technique of using a high pressure injector to administer anesthetic shows results of less discomfort to patients and is much faster acting than needle administered anesthetic.

The Vasclip which was FDA approved in 2003, has its first independent study into the effectiveness and short term complications of the device published in2006. In 2007 the Vasclip website went dead. It was found that it was not easier to reverse this procedure than a regular vasectomy. Many men got the Vasclip thinking that it would be easier to reverse when they wanted to have children again. In many cases it did more damage to the vas deferens.

Dr. Shu has performed no scalpel vasectomy for 15 years. He invented two-finger technique in facilitating the local anesthesia and holding the vas during the surgery. In 2008, Dr. Steven Shu opened his own clinic, One Stop Medical Center in Edina and Shoreview, MN which is focused on in-office procedures including no-scalpel vasectomy. In 2009 Dr. Steven Shu also adds the “no needle” vasectomy. The clinic has been doing many more vasectomies every year after the procedure-oriented clinic gained more reputation and became the number one vasectomy clinic in Minnesota. Dr. Shu was an assistant professor in the University of Minnesota medical school from 2006 to 2012, teaching no scalpel vasectomy and other office procedures.