An esophagogastroduodenoscopy, also known as upper Endoscopy or EGD, is a common procedure performed by the physician with the purpose of examining the upper gastrointestine tract. During the procedure, the mucosal membrane of the esophagus (swallowing tube), the stomach and the duodenum, which is the initial part of the small intestine, is viewed with the help of a small camera mounted on a flexible endoscope introduced into the body through the mouth. The exam can be performed in the office. 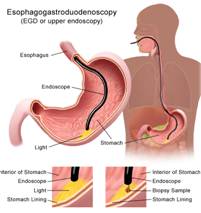 Once the patient is under the effect of the sedative, the endoscope is introduced into the mouth and gradually pushed down the throat along with the swallowing of the patient. It is pushed down through the esophagus to the stomach and then further down up to the duodenum. Air and water are also introduced through the endoscope to ensure better visibility. During the procedure, the mucus membrane of the esophagus, the stomach and the duodenum are studied and necessary biopsies taken if required. The entire process of EGD takes around 15-20 minutes.

Possible complications and side effects of EGD

The patient may very rarely have undesirable side effects of the anesthetic medication like dryness of mouth, shortness of breath, reduced pulse rate, a fall in blood pressure, flushing, tightness around the throat and a lot of sweating.
The side effects of EGD procedure include some soreness of throat which lasts for a day or two. It is because of some irritation caused by the endoscope. There may also be some distension of the abdomen owing to the gas which was introduced during the process for a better examination.

There may be some bleeding from the site of biopsy. Sometimes, the endoscope may damage the mucosal membrane of the esophagus, stomach or duodenum resulting in some bleeding. A very rare complication of EGD is that the endoscope itself may cause perforation of stomach or duodenum which may require surgery to be repaired. High grade pyrexia, any tenderness in upper abdomen, vomiting out of blood or tarry stools after the procedure should be reported to the physician immediately.