Internal hemorrhoids are graded from I to IV based on the degree of prolapse.

Rectal bleeding is the most common symptom of hemorrhoids. The severity of rectal bleeding varies widely.  Besides hemorrhoids, many other conditions also cause rectal bleeding, including ruptured thrombosed external hemorrhoids, fissures, diverticulosis, colon cancer, colitis, polyps and angiodysplasias, however even the slightest amount of bleeding should be taken seriously.

External hemorrhoids usually affect the cleansing after the bowel movement and cause the skin irritation and itching. The patients may feel the lumps near or around the anus. 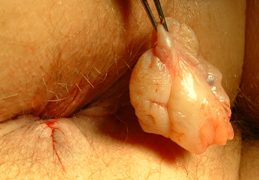 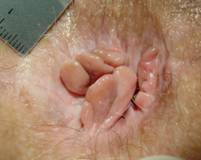